Each week, you are required to submit a reading response for the assigned chapter. The purpose of
the reading responses is to allow students the chance to respond to the reading, demonstrate active
intellectual engagement, and develop critical thinking skills. Your response should include at least
three thoughtful questions or comments about the chapter for the week. Use the following
examples to help you develop your response questions and comments:
What questions do you have about the reading?
Based off of the statement, “the greatest sign that a social movement has been successful is when
there is no longer a need for it because it has achieved its goal,” what is a social movement that
was so effective that we no longer have a movement for it now? To this day we still have feminist
movements and BLM because although we have progressed, I don’t think the goal was entirely
achieved and if at one point it was, we as a society have/are starting to regress.
What did you enjoy about the reading?
I thoroughly enjoyed reading the portion of the textbook which discussed the economic inequality of
the US and compared it first to more equally distributed while making less as a whole to
Scandinavian countries, and then to developing countries with an economic system much like our
own like Pakistan or Mexico. This is fascinating since we as Americans like to think of ourselves as
the most equal democratic leader of the world but compared to countries like Sweden and Finland,
we are very much behind in some needed structural changes. In addition, Scandinavian have
repeatedly been researched as the happiest people so perhaps we should seriously pursue some of
the same changes too.

How does the information provided in the text apply to your personal life?
The beginning of Chapter 6 begins to talk about social deviance. The book talks about how social
deviance can change because as time goes on, social norms can gradually change into new
acceptable views. One personal example would be when one of my best friends came out as gay in
our senior year of high school. Back when “coming out” was uncommon and not socially acceptable,
my best friend would always deny his sexuality, stating that he was always straight. He eventually
came out “coming out” became a socially acceptable practice. Now, it is completely common for
someone to “come out” and state their sexuality even to this day.
What similarities did you find between the information discussed in your textbook and
your other courses?
The chapter also discusses a term called operationalizwhich was new to me. I took a class on Status: Draft Edit
politics of peace in the previous semester and it took us several weeks to deduce a definition of
what peace actually is and how the word is defined differently based on who you ask. Although I
spent so long trying to define peace (and violence), I never knew the term for doing so.
Operationalization is the process of assigning precise method for measuring a term being examined
for use in a particular study- as defined by the textbook- which is exactly what I was doing with my
politics of peace class the entire semester. 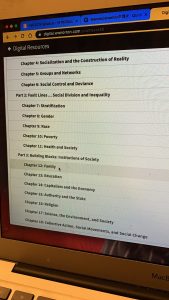