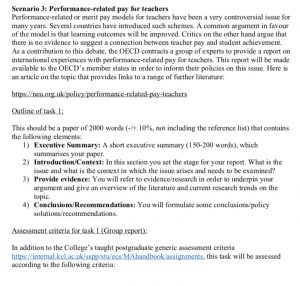 3rd positive
Moreover, the PRP scheme can be served as a policy tool to enhance the overall
education performance. With the positive outcomes on instructing motivation and
teaching quality from providing teachers with salary related to students’ academic
performance, Adele et al. (2008) argued that education authorities can regard
performance-related pay as a strategy, which can be further developed in to
education policy so as to benefit educational performance outcome. It is advocated
that while many teachers are tend to jump out of the profession, performance pay
can be used as an device to retain high quality teachers in the teaching field (Jones,
2013).
过渡:
Even though we have found that the teacher-based performance pay is beneficial to
drive teachers’ motivation, strengthen teachers’ quality and thus serves as an
effective tool for education authorities, the rationale of these findings is mainly based
on a limited range of studies and an almost ideal framework. The
performance-related-pay strategy still has its own drawbacks.
1st negative
The first criticism of the PRP scheme focuses on the pay determination – who make
the decision and how the decision is made. With regards to the modes of pay
determination, Parkinson (cited in Cluter & Waine, 1999) had found that the
judgement is done dominantly in two ways. The first mode of pay determination is
settled by school management board, but with an absence of particular executives
when their cases are being discussed. In the other mode, the “Remuneration
Committee”, which consist of non-executive directors, make the decision. However,
both ways of pay determination are being criticised and “have come under attack on
grounds of conflicts of interest” (Cluter & Waine, 1999) It is surprising to find out that
both sides of pay decision-maker have neither incentive nor interest in reducing
remuneration. On the one hand, corporate executives fear that driving down the
salary of their colleague may lead to a negative impact of their own remuneration.
On the other hand, the non-executive directors usually have dual identity: they are
appointed by the board, and at the same time, they are the executive directors of
other organisations themselves (Cluter & Waine, 1999). Besides the two major
decision channel systems, the determination of payment is also largely influenced by
the location of the schools, official expenditures and graduation rates (Jones, 2013).
For districts in the cites, the closer to universities, the more likely to implement
performance-related pay. Public opinion on education issues, putting on political and
parental pressure, also functions as a driver to pay determination. Thus, it is obvious
that the performance pay implementation varies with accordance to different
interacting factors, ranging from the two mainstream determination channel, to
geographical elements, government spendings, and graduation rates, which adds on
the complexity of determining performance pay.

4th negative
Furthermore, it is extremely difficult to achieve the ultimate goal of equity and
incentive at the same time. As Lundstrom (2011) argues, a pay system which both
arouse motivation and maintain fairness does not seem to exist in a far-reaching
knowledge. The assessment of performance ought to be reasonable, reliable,
objective and rewarding, however, there is no absolute fairness when we are also
emphasising motivation. The productivity of a teacher can be measured among
various perspectives, and that we cannot easily judge a teacher who is adept in
researching educational outcomes inferior to those who provide students with drill
and practice. If we assess teachers from different district with equivalent amount of
salaries, then their expecting behaviour will not be affected (Jones, 2013). As a
matter of fact, it will be a strike for teachers’ incentives, colleague cohesion within an
educational institution will be worsen either.